Good health depends on pure drinking water but its availability is difficult in many coastal and remote villages. So, the GHCL Foundation decided to intervene and address the issue. Working in association with WASMO (Water & Sanitation Management Organisation) an institution of the Government of Gujarat, GHCL Foundation initiated a project ‘NAL SE JAL’, to insure the accessibility of pure drinking water in every household.

Village Alidhra is 23 kms away from GHCL’s Soda Ash plant at Sutrapada. This village did not have access to clean drinking water. The worst affected were the farmers living on the outskirts and the landless farming labours in the village. GHCL Foundation conducted meetings with the Panchayat but the members did not seem interested.

Harshaben was the elected Sarpanch (Pradhan) of the village Panchayat but her husband was the acting Sarpanch on her behalf. However, he passed away in an accident. In order to proceed further, the CSR team approached Harshaben and requested her involvement. She understood and said “This concerns the women of the village and not the men because the women are facing the crisis”. With her active interest, a Mahila Pani Samiti was created in the Panchayat. 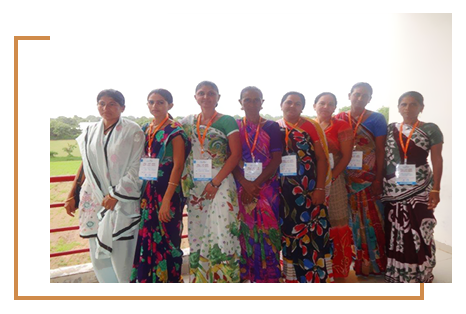 The Foundation team knew that for a successful community project, a small but meaningful contribution and participation of the people was very important and created ownership. So, 5% of total project cost was collected from the village by the Pani Samiti. The women  faced many challenges during the collection drive but they resolutely continued the process of technical survey, micro planning, dealing with Govt. officials, MoU, tendering process, procurement, construction of overhead tank,  installation of pipeline network. Each step increased their confidence and they felt empowered.

Finally, when the tap opened and drinking water gushed out, the ultimate satisfaction and joy of the women was unbelievable. After this, these women also constructed household toilets.

GHCL Foundation completed the drinking water project and empowered women. One activity helped them understand about finance and management skill. However, the ultimate moment of pride was when the Chief Minister of Gujarat rewarded our village “Pani Samiti”.

GHCL Foundation has completed such successful drinking water projects in 12 villages and now it has been extended to 45 more villages.